Edacademie
Georgia is a Caucasus region of Eurasia which is located at the Crossroads of Western Asia and Eastern Europe. With Tbilisi and Kutaisi, the legislative captial, Georgian cuisine have its own cooking styles and delicious dishes created by Georgian people. Though Georgian cuisine is unique, its also have some influences from Causcasian, Eastern European and Middle Eastern cooking style. The three prominent regional cuisine of Georgia calls for Abkhaz, Adjar and Gurian cuisine. Abkhaz cuisine uses lot of spices and walnuts while Adjar cuisine is considered as diversified cuisine which is completely influenced by its nature and have dairy products as main ingredients. And Gurian cuisine calls for poultry meat, corn bread and loads of walnuts. While googling, i accidently crossed this Imeruli Khachapuri which belongs to the Imereti region in Georgia situated along the middle and upper regions of Rioni river.Khachapuri is one of the most popular, traditional and National Georgian dishes. It’s a gooey cheese-filled bread that looks a little like pizza.There are three different kinds of khachapuri. The standard one is the Imeruli khachapuri which cheese is stuffed inside. There is also the Megruli khachapuri, with cheese added on top and the Adjaruli khachapuri, which is made of puffy hot bread with cheese melted in the middle and topped with hunks of butter and a cracked egg. 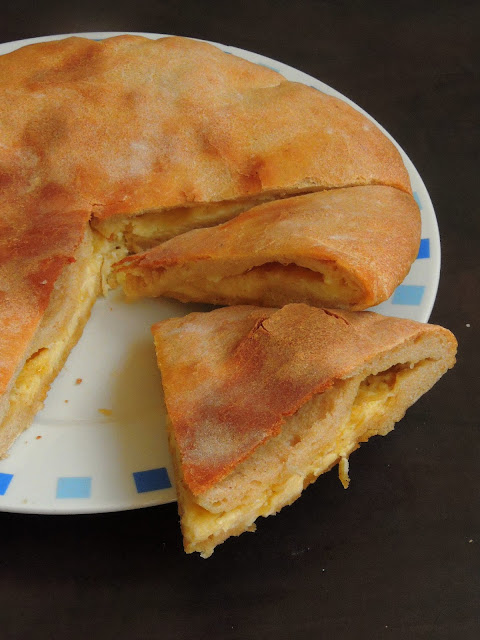 Though many khachapuri do exists in Georgia, Imeruli Khachapuri resembles like simple pita or nan bread which is stuffed with Imeruli cheese or an imeruli sulgani mixture. This flatbread is served as part of Supra, a traditional Georgian feast spread. Imeruli uses a dough which is rolled as disc and stuffed with a mix of cheeses and this flatbread is baked in oven which is easily cooked. And  with this same flatbread dough, you can also prepare Lobiani an another Georgian dish prepared by skipping the cheese and stuffed this Imeruli dough with a smoky spiced bean filling or prepare a lamb and onion stuffed Svaneti Style Kubdari. Am running this month’s A-Z International flatbread with some delicious and different flatbreads from around the world. And here comes a fabulous Cheesy flatbread from Georgia. Obviously this Imeruli Khachapuri goes for the Alphabet ‘I’. Stay tuned to watch out some interesting flatbreads in my space. 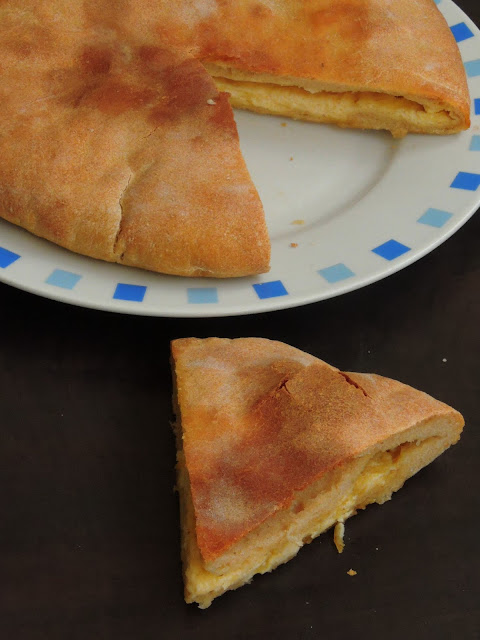 Take the all purpose flour, instant yeast, salt, sugar in a bowl, add the luke warm milk gradually and knead.

Knead well until the dough turns soft and smooth.

Arrange the dough on a greased bowl and keep aside until the dough double its volume.

Meanwhile, take the egg, butter, mixed cheese in a bowl, mix well and keep aside.

Dust the work surface and roll a dough ball as a medium sized disc with a rolling pin. 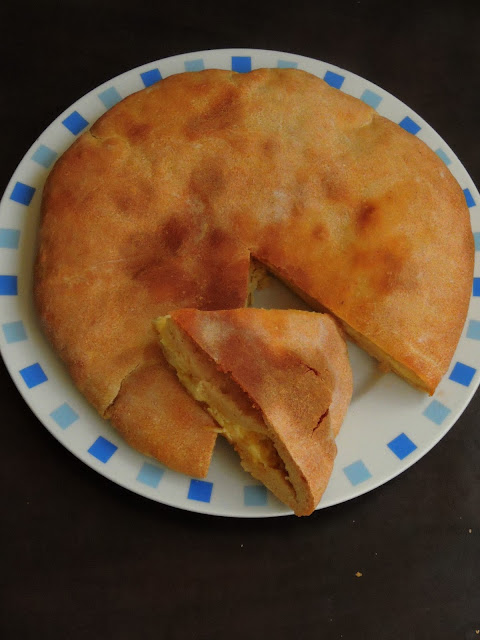 Drop enough cheese mixture in the center of the rolled disc, bring the edges together and pinch the edges well.

Now dust again the stuffed dough and roll gently as a circular shaped flatbread, take care not to tear the dough.Continue the same process with the remaining dough.

Preheat the oven to 350F, drop the rolled khachapuris on a baking tray and bake for 15-20minutes until the crust turns golden brown.

Brush the warm khachapuri with butter.

Once the khachapuri gets bit cool, slice it and enjoy immediately.