Edacademie
Did you know that potatoes are good for you? Unfortunately, they have a reputation for being fattening. It’s true if you eat a lot of french fries from fast-food restaurants and bags of potato chips. But, if you cook your own potatoes at home and don’t slather them with gobs of butter and sour cream you’ll be okay. I often use olive oil on my potatoes, which is healthier and still tasty.

Potatoes are good for us; they contain all the vitamins and minerals necessary to sustain life (except vitamin D, which we get from the sun). They are also high in carbohydrates, which gives us energy.

There are many potato varieties to choose. Here is a helpful potato guideline:

Did you know the Idaho potato is a registered trademark? The same potato grown outside Idaho is called a russet or a baking potato. They are a starchy, low moisture potato and are great for baking, frying, and mashing.

Are your potatoes green in spots? Potatoes can turn green when exposed to light. The process speeds up when potatoes are left at room temperature. The green colour is due to the presence of chlorophyll, a natural plant pigment. However, solanine, a toxic, bitter-tasting chemical can also develop in the same green area as the chlorophyll. If ingested in large quantities, solanine can be toxic.

So cut or peel away any green areas in a potato before cooking. Always store potatoes in a dark, cool, dry, and well-ventilated area (not plastic bags). Keep them away from onions because they produce a gas that will speed up the decay of both. New potatoes are picked before they are mature and ideally should be used right away. If not, store them in the refrigerator. 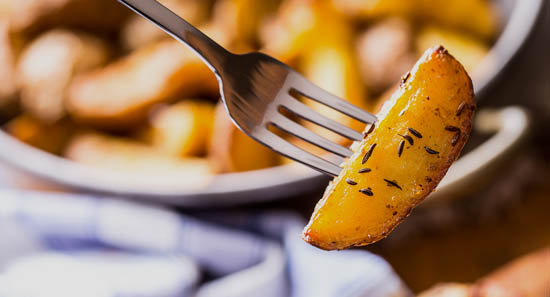 Here’s an Oven Roasted French Fries recipe to try which has a whole lot less fat when they’re made this way at home.

Preheat oven to 425° F. Cut potatoes in half. Cut halves lengthwise into 1/4” pieces. Place into a bowl and coat with olive oil and salt. Place flat on a cooking sheet lined with parchment paper and cook 10 minutes. Turn each potato over and cook another 10 minutes or until a light golden colour.

Looking for other potato recipes? Try our