Edacademie
Halbai or Halubai is a sweet dish from Karnataka which is literally known as rice halwa or rice cake as this dish is usually prepared with rice, jaggery and coconut with ghee. This sweet is prepared during Nagara panchami festival and its quite a healthy sweet to indulge without any fuss. Halbai is  often made in Udupi, Mangalore and Malnad region of Karnataka for a festival or celebration. Halbai is quite a delicious sweet which ressembles quite like burfi which is dangerously addictive. Though Halbai is traditionally made with rice, even rice flour, ragi and semolina can be used to give an another variation to this ultimate sweet. Since fresh coconut and jaggery is used in this sweet, trust me you cant just stop with a slice of this ultimate sweet. As i told earlier, traditionally this dish is prepared with a grounded rice-coconut paste and jaggery syrup, once cooked until they turns thick, this sweet is poured on a grease plate. Later, slice the halbai and serve. But my today’s post is completely prepared with chiroti rava, yes its quite an easy and tasty version of halbai. 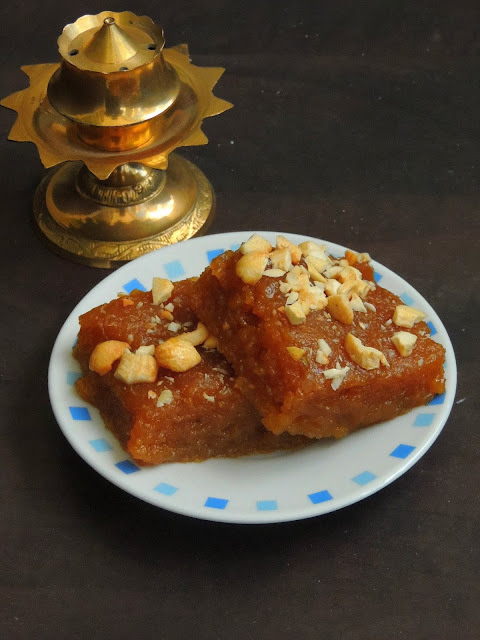 And this Semolina halbai goes to this month’s Shh Cooking Secretly, a monthly event started by me, which is now hosted by Mayuri Patel. And for this month,we are cooking from Karnataka cuisine, and my pair for this month’s event is Jagruti of Jagruti’s Cooking Odyssey. Jags is one of my favourite co blogger, though we have been chit-chatting virtually since a long, few years back i had a chance to met her personally during my week end to London. And finally we were pair for this month’s event and she gave me Semolina and coconut as my secret ingredients. Initially i want to try something savoury from Karnataka cuisine, but while googling i couldnt resist to make these Halbai which is completely new for me. Apart from stirring this incredible sweet, nothing much is needed to make this irresistible Halbai. Cant wait to try this glossy Halbai very soon with rice as everyone at home enjoyed this sweet cake thoroughly. 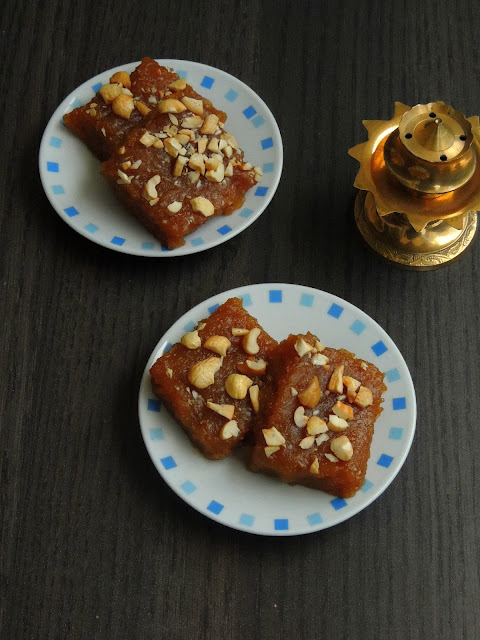 Soak the chiroti rava in 2 cups of water for an hour.

Grind it along with water, cloves,grated coconut and cardamom to a fine paste.Transfer it to a thick bottom pan.

Melt the jaggery with quarter cup of water. Strain this jaggery to the rava coconut paste. 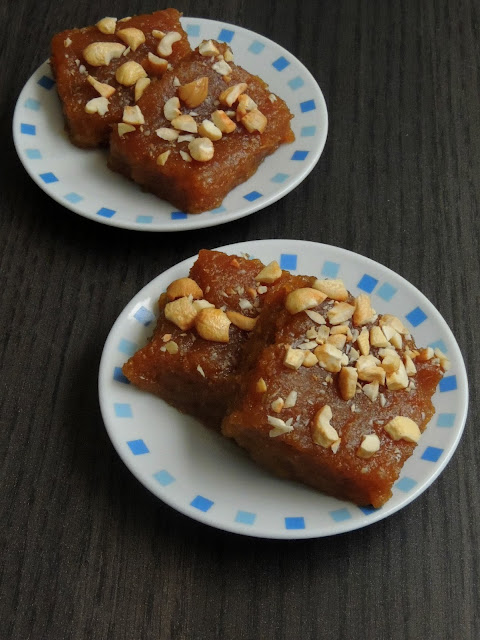 Clean the jar with an another quarter cup water and add this to the semolina mixture.

Mix it thoroughly and cook in medium heat, keep stirring.

After few minutues, the mixture will become thick, reduce the heat to low, add a tablespoon of ghee. at a time and keep stirring.

Once the mixture leaves the pan, turn off the heat and transfer the mixture to the greased plate, spread it evenly.

Grease a knife and cut the halbai as slices. 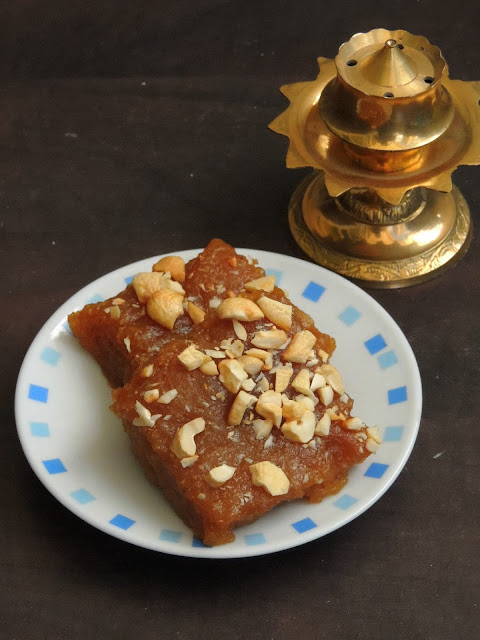