Edacademie
Kazhakhstan officially the Republic of Kazakhstan is a dominant nation of Central Asia. Kazakhstan is offically a democratic, unitary, secular, constitutioal republic with diverse cultural heritage. Kazakhstan share borders with Russia, China, Kyrgyzstan, Uzbekistan, Turkmenistan and Capsian sea.Kazakhstan has undoubtedly adopted some of the peculiarities found in the cuisines of neighboring countries like Uzbekistan, Azerbaijan, even Russia and Iran. Yet Kazakhstani gastronomy has, at the same time, developed its own identity. Kazakh nomads have historically produced a range of foods centered on meat, including lamb, beef and camel. As a Muslim-majority country, Kazakhstanis do not eat pork, hence horsemeat when flavored with spices and sauces,  makes the main ingredient in many traditional dishes of this Caspian and Central Asian nation.Black tea,is considered as Kazakhstan’s most-consumed drink,this makes it one of the largest tea-consuming countries. . Here tea is served by mixing it with cream and milk, making it delicious. Shelpek is a very well known flatbread of Central Asian country and i grabbed this flatbread for this month”s blogging marathon as am running with A-Z International flatbreads as theme for this whole month. 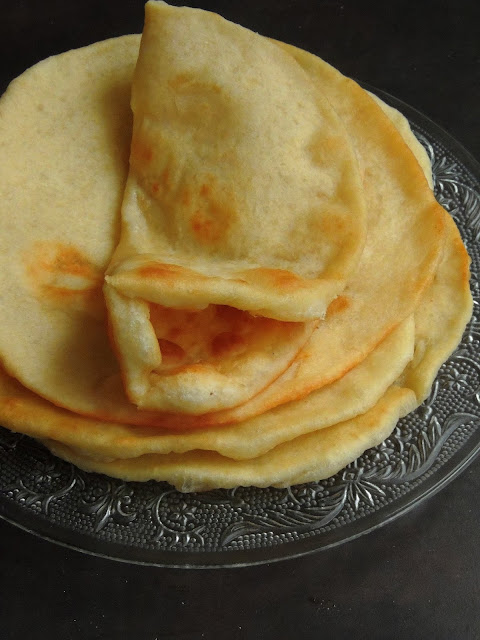 Shelpek is a traditional flatbread consumed throughout Central Asia. Flour, milk, sugar, butter, sour cream, baking soda, salt and vegetable oil are combined to form a dough that are cooked on a hot flat surface, like a frying pan, or in a tandoor,the cylindrical clay oven heated with hot coals. These tortilla like breads take on a special significance on Fridays, considered as the holiest day of the week for Muslims, and they are prepared to honor the memory of the deceased. Some versions of shelpek are made by frying dough balls as well.These Kazakh flatbreads are folded like a pancake, and served for tea: with sour cream, cheese or jam. And also shelpek, is an excellent substitute for bread to serve along with stews or curries, obviously you can serve them with broth or salads or else wrap them as sandwiches. Shelpek is typically prepared with baking soda but i replace baking soda with yeast as some of the Central Asian blogs suggested using yeast in Shelpek dough, trust me yeast makes this bread so light and super soft. 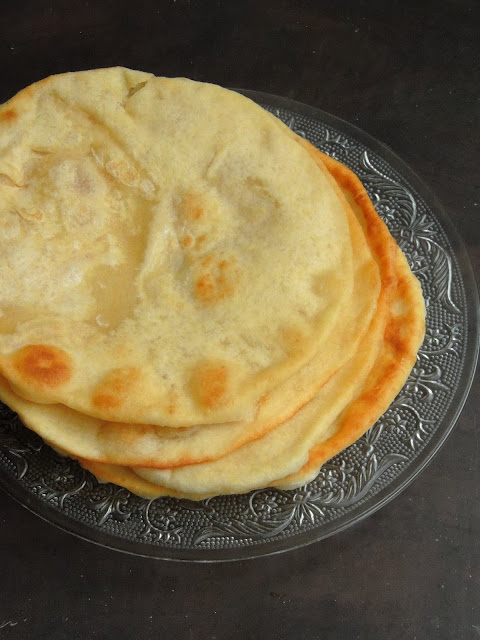 Drop the dough on a floured surface and knead everything well until the dough turns soft and elastic.

Arrange dough in a greased bowl, wrap it and leave the dough for an hour. 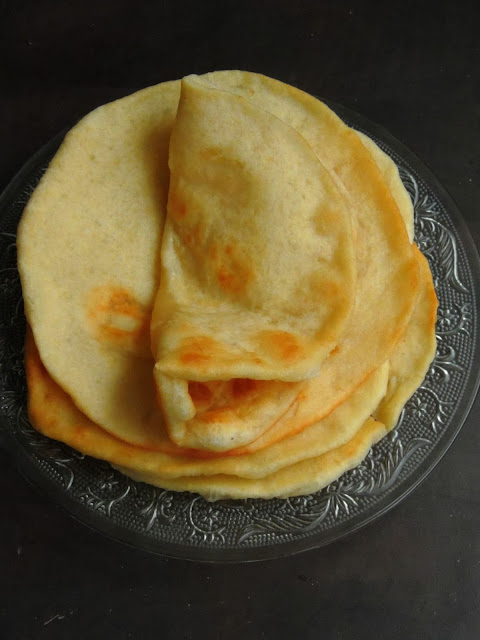 After an hour, punch the dough and divide the dough into 5-6 balls.

Dust the ball and roll as thin circle as possible.

Meanwhile heat oil for shallow frying in a frying pan.

Once the oil is hot, drop the rolled disc and fry on both sides until the shelpek gets cooked.

Continue the same process with the remaining dough. 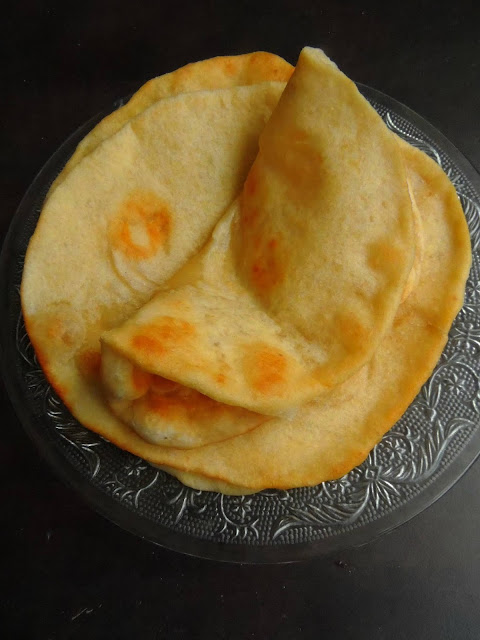