Edacademie
Yemen is known as Republic of Yemen situated in Western Asia, with Sana’a as capital this country is indeed right of Mecca, the holy city for muslims. I have already tried couple of dishes from this cuisine. You might have noticed that am running a month of blogging marathon with A-Z International flatbreads and i grabbed a Yemenite flat bread aka Malawach. Malawach/Malawah is quite a Yemenite Jewish fried bread which is traditional in both Yemeni and Israeli cuisine. Malawah or Malawach resembles very much as a crispy pancake which is served with variety of accompaniments. This bread calls for a similiar preparation technique of puff pastry. Hence this Malawah consists of thin layers of puff pastry which is brushed with fat or oil and cooked in frying pan or baked in oven. Malawah is a staple of all Yemeni Jews.This dish is served always with hard boiled eggs,chopped or crushed flavoured tomatoes and cheese. Through immigration of Yemenite Jews to Isreal, this bread had become a favourite comforts food for Israel of all backgrounds and national origins. 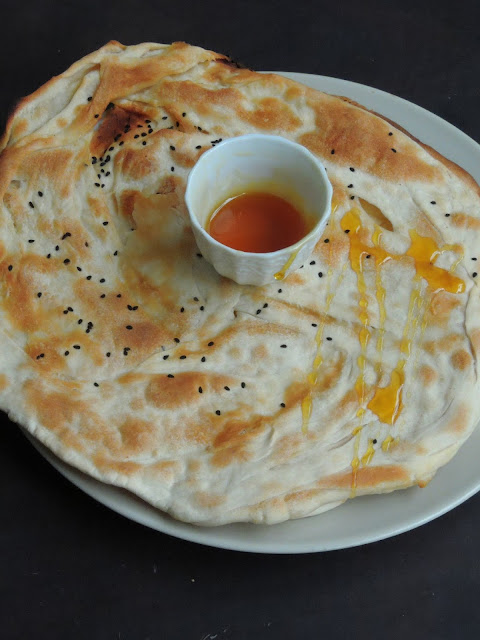 Malawah can also served in a sweet version with warm butter and honey which makes an excellent breakfast and snacks. Yemeni Malawah ressembles quite like few breads which are in well known in other countries like Meloui from Morocco, Malawax from Somalia, Mlawi from Tunisia, South Indian parotta and North Indian laccha paratha. The dough is really simplewhich calls flour and water and let the mixer or your hands do the rest. The dough is rested, then rolled thinly and spread liberally with the softened margarine/oil/butter. Next it has to be folded and rolled, like puff pastry, to incorporate the fat and create the flaky layers. I followed the Sheba’s Yemeni Food to dish out this incredible flaky flatbread. If you know how to make our South Indian parotta or North Indian Laccha paratha, then trust me this Flaky Yemenite Malawah is quite easy to roll the buttered dough as a rope then folding the ends in to give a knot like and then rolling the whole thing flat with a rolling pin. Sheba shared a video for making this flatbread, obviously its quite interesting to give a try to this crispy flatbread.

Take the flour, water, and salt and knead it until smooth. Knead well until the dough turns soft and elastic.

Divide the dough as two equal balls, brush the dough balls with melted butter and let it relax for half an hour.

Grease the counter top, drop the dough and with a greased hands pull the dough as thin as possible as much as we do for South Indian parottas.

Once the dough is stretched nicely, brush the stretched dough nicely with melted butter.

Fold the dough as a rope like shaped dough. Then tie the rope into a knot. 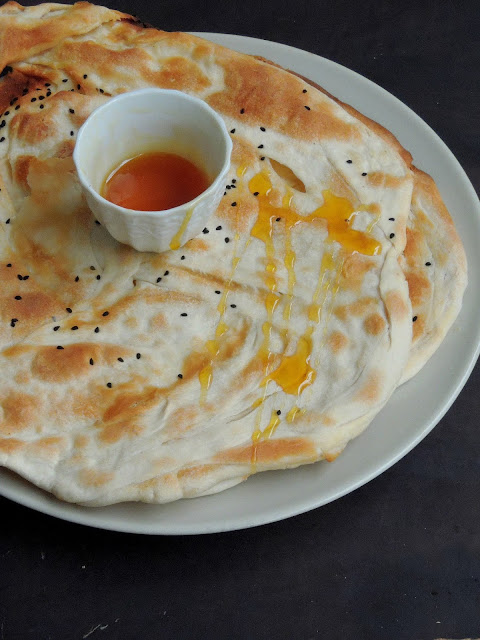 Tuck the end loosely.Cover and let it relax for another half an hour. Continue the same process with the remaining dough.

Preheat the oven to 400F. Now pull the already prepared dough with your hands to make a slightly thin flatbread. Sprinkle the black seeds on the top.

Sprinkle the cornmeal on the baking tray, transfer the shaped flatbread to the tray. Bake for 12-15 minutes until the flatbread turns crispy.

Remove the bread from the oven and serve immediately.

We had with butter and honey, though you can serve with some spicy curries. 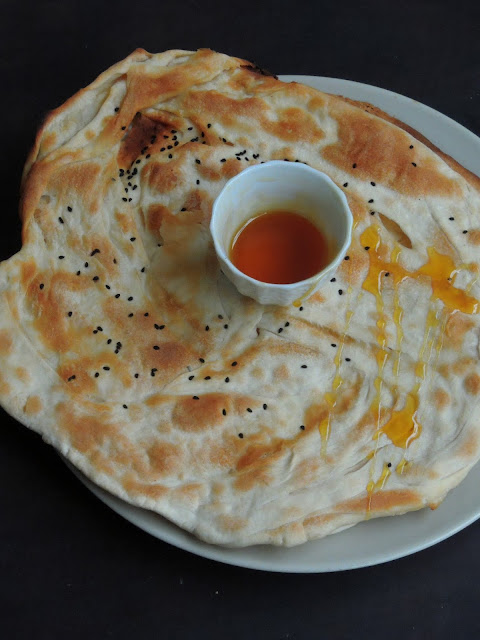