Edacademie
Lebanon is a country in Western Asia with Syria, Isreal,Cyrpus as boundaries. A unique cultural history has helped to make Lebanese food the most popular of all Middle Eastern cuisines. Lebanon has been ruled by foreign powers that have influenced the types of food the Lebanese ate.The Ottoman Turks controlled Lebanon and introduced a variety of foods that have become staples in the Lebanese diet, including olive oil, fresh bread, baklava a sweet pastry dessert, laban (homemade yogurt), stuffed vegetables, and a variety of nuts. France took control of Lebanon and introduced the flan, a caramel custard dessert and buttery croissants. I have been running a month of blogging marathon with A to Z International flatbreads and today is my last post of this month’s mega marathon. And for the alphabetic letter ‘Z’, i couldnt think more than Zaatar spice mix, hence i opted for Zaatar pizza for this last post. The manoosheh recipe is often compared to  Italian pizza, hence it is called “Lebanese pizza”.Zaatar manooshe aka Zaatar pizza is the most popular version. Each flatbread is topped with a mixture of za’atar and olive oil before being cooked and are most often consumed at breakfast with tea, but also after dinner accompanied by soft drinks. 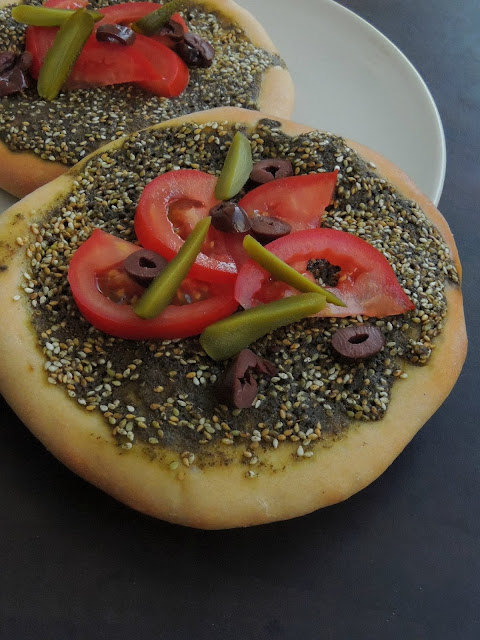 This flatbreads are traditionally is cooked on a Saj, a sort of large, metal dome but still you can baked them in a pan or in a traditional oven to bake them. Zaatar, this spice mixture contains sesame seeds, salt, dried thyme and sumac. Sumac is a spice made from red berries which is grounded into powder. This gives a subtle flavor and its very much used in middle eastern cooking. Zaatar, is well known in Levantine cuisine though it is already well known in Ancient Egypt. Coming to my today’s post, i opted for Zaatar pizza as this flatbread goes as much as like Manakish however this zaatar manoosheh is served with topping like tomatoes, fresh herbs, cheese, cucumbers, olives or with festa cheese. I went with tomatoes, crunchy gerkins and black olives, we just enjoyed this flavoursome rich pizza for our lunch with salad. Kids enjoyed thoroughly, however am planning to try this same pizza with minced meat very soon as we loved this flatbreads very much. 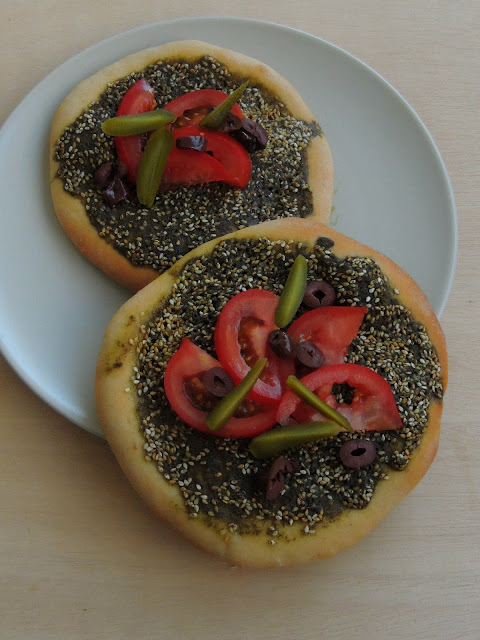 Take 1/4 cup of water in a bowl,add sugar and yeast and give it a stir. Set it aside for 10 minutes.

Sift together flour and salt. Make a well in the center and add olive oil, yeast mixture and the remaining water.

Mix it well using a spoon until everything combines together.

Dust the counter with some extra flour and transfer the dough to the counter. Knead the dough for a while until it turns soft and shiny.

Make a ball of the dough. Coat a large bowl with a teaspoon of olive oil. Place the dough in the bowl.

Coat the dough with oil on all sides. Keep covered with a damp cloth and place the bowl in a  warm place until double in size. 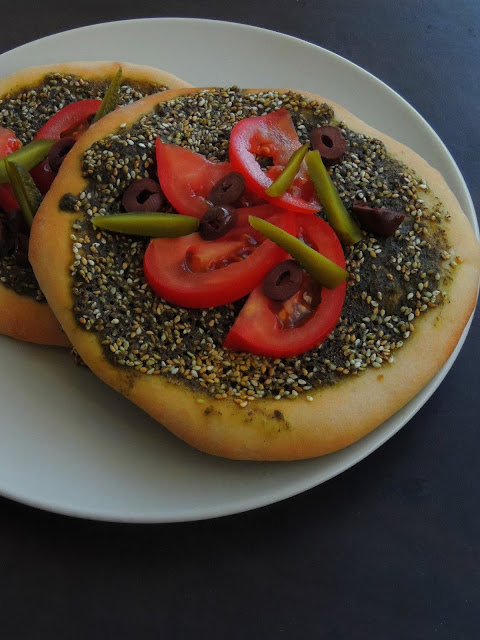 Punch down the dough and release the air and knead it roughly.

Mix the zaatar spice mix,sesame seeds, olive oil in a bowl. Spread this mix over the flattened dough.

Bake in pre-heated oven at 350F for about 10 to 15 minutes until the top is golden brown.

Remove from oven, place it on wire rack. 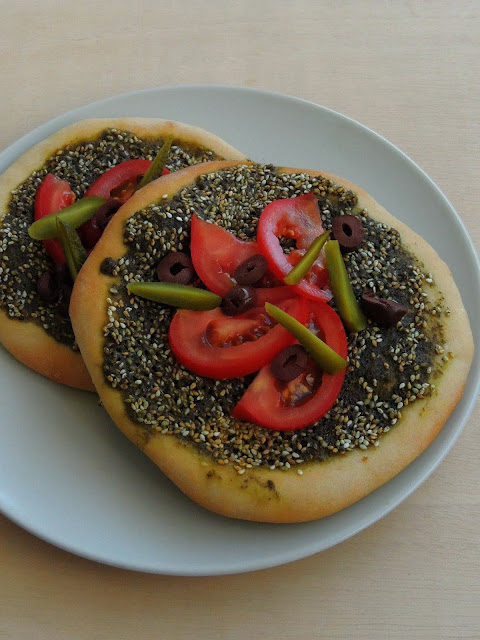