After a long time not updating about blush, I’m finally back with a review of blush on products, from a local brand that keeps innovating, namely Emina. I actually bought this product on impulse, accidentally saw it at the cosmetic booth at the supermarket. Since the product has not been released recently, I’m really curious and for some reason my feet reach Emina’s booth even though when I went to the supermarket I didn’t want to buy makeup. But yes, her name is also a woman, right :’) I don’t know because I have “cold” money too so I go there wkwk

I actually really like Pixy Twin Blush cream blush. I’ve even repurchased. But there is one thing that makes me disappointed about the packaging of the product, which is very flimsy and easily broken, mine was already broken so the lid was not closed and it affected the blush. At first the blush smells good and when the lid is closed it doesn’t fit tightly because it’s broken the smell of the blush changes a bit 🙁

Then when I saw Emina’s Blush, I immediately got hooked, because she’s a stick shape. Emina Cheeklit Blush Stick Pink. Since I haven’t tried the stick blush, I had high hopes for this Emina blush.

Btw I’ve used it a few times in the last 2 weeks and I’m going to write a review now, let’s keep scrolling!

When it comes to packaging, don’t ask Emina, yes, the packaging is always gorgeous. Because I chose the shade pink, the packaging box is also a pastel pink which is very subdued in color. As far as I know there are 2 shades, pink and peach. As for the blush itself, it is packaged in a pale pink plastic tube and the packaging is more or less like a lipstick but with a wider diameter. Btw this is my first time trying stick blush. 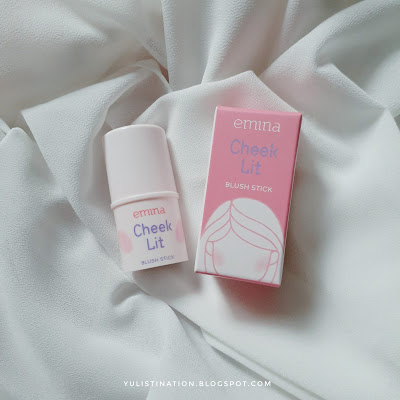 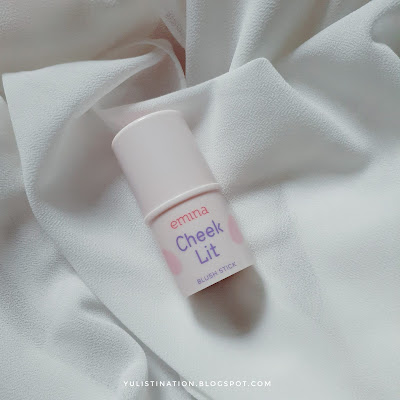 In the blush, an additional transparent cover is added to increase the safety of the product, right? Don’t let it get messy or get scratched too. But I think it’s a bit complicated, even though the packaging is secure. If it’s hectic, it’s going to be a bit less easy to open, wow, oh yeah, my advice is to just add a safety seal on the box to prevent it from opening before buying. Because when I bought this Emina blush, the box didn’t come with a seal 🙁 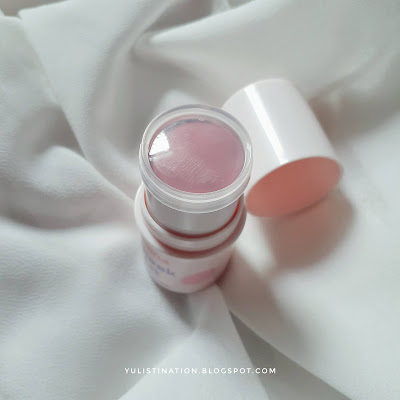 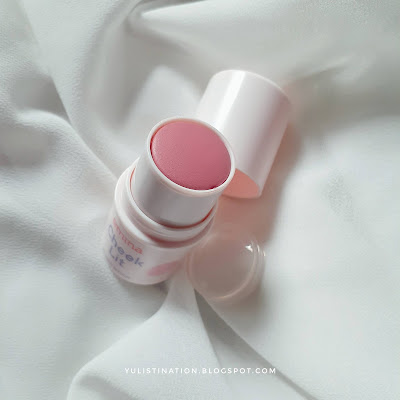 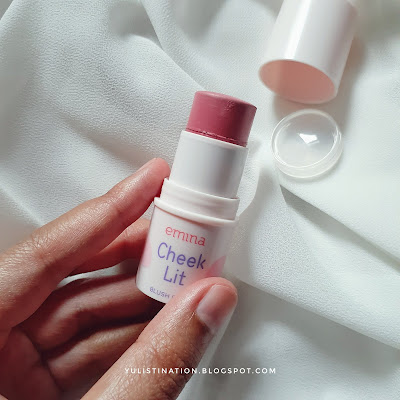 I think the packaging of Emina’s blush stick is really tiny. So it’s very easy to carry when traveling because it won’t fill your makeup pouch. In the photo above is the full contents of Emina Cheeklit blush stick which weighs 7grams. I’m sure this will last a long time. The problem is that now I rarely dress up because I’m always at home, at least once a week, when I go on a date with my boyfriend, then I dress up 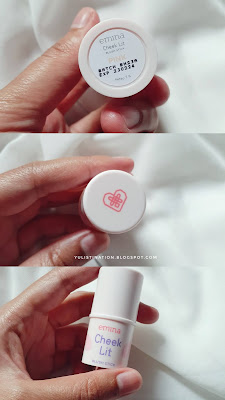 Blush with a creamy to powdery texture that gives a hue to your cheeks. Apply and blend for a matte, natural-looking blush.

As for the ingredients, I don’t really understand, but at the top there is candelilla wax and vitamin E (tocopheryl acetate) which is at the end. Oh yes, the good news is that this Emina blush stick is already halal-certified.

OK, now let’s look at the performance of the product. When I swatched the product for the first time, it was super creamy, not sticky at all, really soft when applied on the skin. Even though it is surprisingly creamy the end result is what it claims, it has a powdery finish on the cheeks. It’s so cute. As for the color, I have the shade pink. Her pink has a neutral tone, and I think it suits all skintones. It’s pink is more mauve, there’s an element of purple to it too but it’s not that loud. Anyway, this typical blush color is really my favorite for daily use. 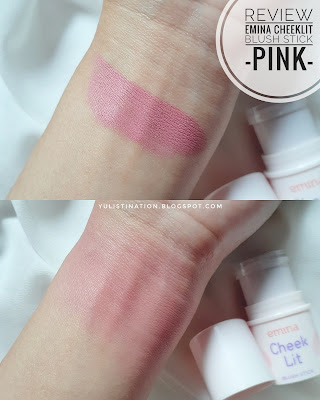 When you swipe it on your cheeks, the pigmentation is quite strong, but when you blend it, the color is very natural and subdued. I don’t know why sometimes on my cheeks the color can look different, sometimes it’s really pink. Sometimes it even becomes coral, the color is like the swatches below: 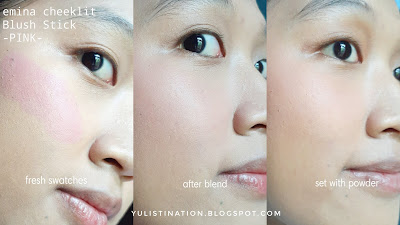 I don’t know what triggers it to be different. But overall, for me, it’s okay. I usually apply blush after foundation before applying powder. The blush looks very natural. I’ve tried building up the blush to increase the pigmentation but it still looks the same to me. The pixy twin blush is more pigmented, actually sebenernya I really recommend this blush for young teens because the results are really natural. Considering that I’m already in my 2nd head, I’m quite old so I prefer blushes that are more vibrant in color btw I haven’t tried applying it on powder, but I think the blush will be safe and won’t damage the base makeup. It’s because the texture of this Emina blush, even though it’s a stick, is creamy and very soft, so it’s really blendable.

As for staying power, I can say it’s normal, standard like blush generally lasts 4 hours on me at most, before I get water to wash my face. After washing my face, I start to notice that the blush appears less pigmented.

It’s a good product to try! This is my first blush stick and I’m quite satisfied with the performance of the product. With the price of IDR 43,600 that I bought from Asia Toserba Garut, I think it’s worth it for a blush stick product, which is usually quite pricey. Oh, you can also buy through Emina Official Store Shopee and get various promos to attractive discounts there!

For those of you who like blush with a calm and natural color, this Emina Cheek Lit Blush Stick can be your choice because the color pigmentation is very natural after blending, perfect for daily makeup.

Okay guys, that’s my review this time, I hope it helps! See you on another review ^^

Hey gangs, this time I will review an eye makeup product, specifically a browcara product, aka eyebrow mascara. Actually, since...

Hello... see you again on my blog, this time I want to write a review of a toner that I've...

Hey gangs! This time I'm back with a review of a product that I've been using for about 2 weeks,...

Hey guys, this time I'm back again with a review of a sunscreen product that I've been trying for a...

Who doesn't know Scarlett? Scarlett is a brand under the auspices of the artist Felicya Angelista which focuses on beauty...

Hi, this time I want to share my experience and review after trying the Vaseline Lip Care Original Lip Balm...