Edacademie
Christmas eve kick starts tonite, obviously i want to share some Xmas friendly baked goodies for this week’s Bake-a-Thon event am running for this whole month. Though am bit late in posting some delightful Xmas bakes, its better late than never na. Am kicking starting this week with an ultimate brioche bread shaped as Santa claus, yea you heard it rite. I baked a beautiful brioche bread as Santa claus. I have bookmarked this bread long back and this bread was in my to do list for more than three years, finally i baked this bread for this year’s Xmas. Since i want this shaped bread more rich and delicious, i couldnt stop myself baking with a super rich bread dough aka brioche dough. Brioche dough calls for eggs, butter and milk along with usual ingredients. The addition of eggs and butter makes this dough more rich than the usual bread dough. 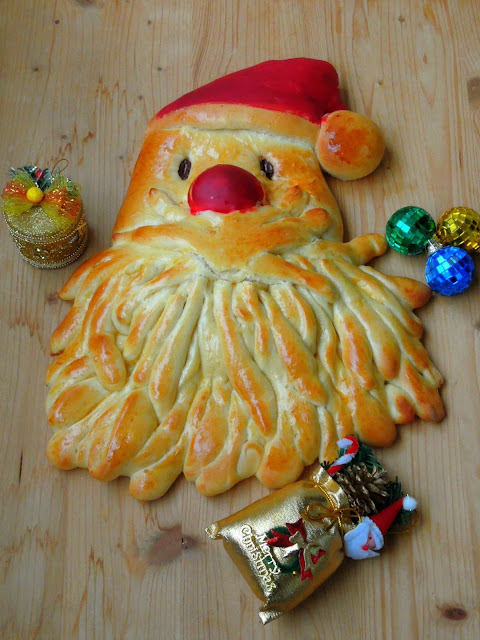 As i told earlier, this brioche goes to Bake-a-thon, yearly baking event which falls every year only on december. We few fellow bloggers have been running this event since few years and we will be posting three bakes for a week only on Mondays, wednesdays and fridays. Baking is one of my favourite passion after cooking, its quite a stress burster for me. Obviously i will always plan to bake during weekend coz of my professional life. And everyone at home love to enjoy homemade baked goodies for their sunday brunch. Nothing can beat homemade bakes which are completely preservative-free. I rarely get the store bought breads as i bake myself varieties of breads at home. Since homemade breads are preservative -free, its better to consume quickly. Do you know you can freeze very well homemade breads as well. Its happens rarely yes, i do freeze some of my breads which is quite handy when we ran out of breads for our week day’s breakfast. 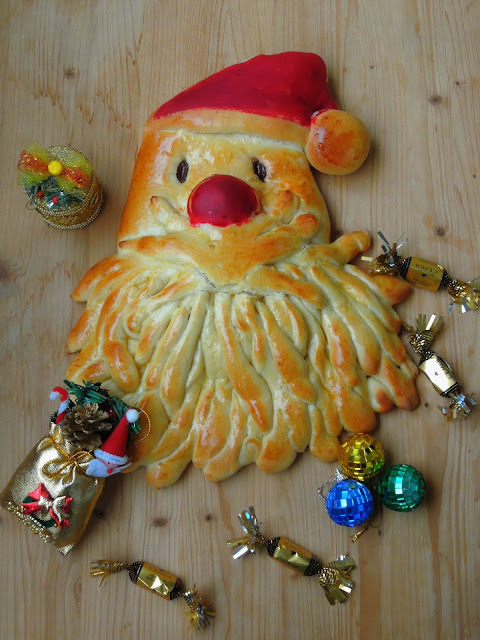 Mix the yeast,a teaspoon of sugar and salt to the luke warm milk, keep aside until the yeast turns foamy.

Meanwhile take the flour,egg yolks,egg,sugar in a large bowl, add gradually the foamy yeast and turn everything as a soft dough, now add the butter and knead everything for 10minutes.

Arrange the dough in a bowl covered with a towel,keep aside for atleast for 2 hours until they double their volume.

Knead the dough again for few minutes, divide the dough as 2 portions, one larger than the other portion. 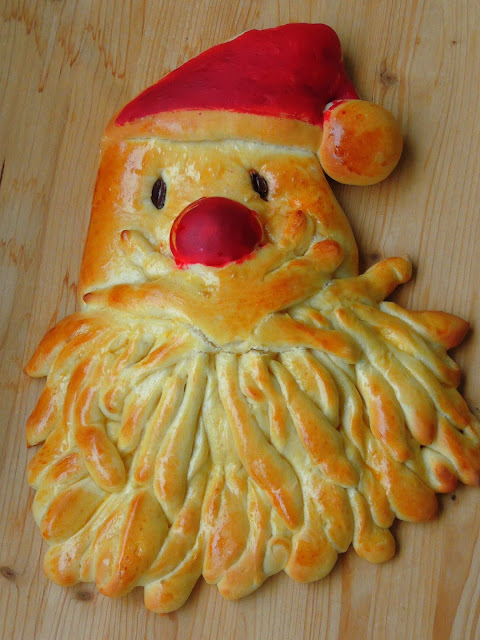 Shape the larger portion into an elongated triangle with rounded corners for Santa’s head and hat.

Divide the smaller portion to half. Shape and flatten one half into a beard.

Using scissors or a pizza cutter, cut into strips.  Place on Santa’s face, twist the strips.

Shape a portion of dough into a mustache, flatten and cut the ends into small strips with scissors.

Place above the beard.

Place a small ball above mustache for nose. 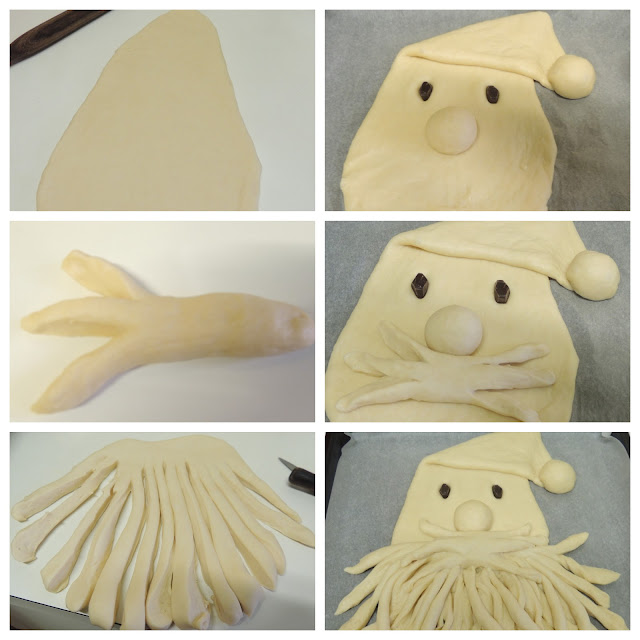 Fold tip of hat over and add another ball for pom-pom.

Keep aside and let it sit for 30 minutes. Preheat the oven to 350F.

Mix the food colour with water as thick paste, carefully brush over hat and nose.

Bake for 25-30 minutes until the bread turns golden brown.

Keep aside and let it cool completely. 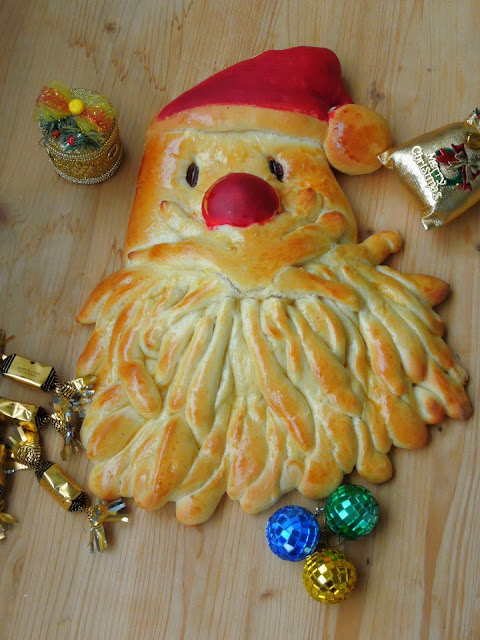