As a kid, I’d watch the cartoon character Popeye gobble down cans of spinach. Instantly, he transformed and became strong, flexing his mountainous bulging arms to prove it. Wow!  I was a believer…but it wasn’t enough to make me like spinach.  I never liked the flavour. It tasted metallic somehow.  My mother would buy a frozen block of spinach, boil it forever and serve it to us.  There it sat, like a sad lump of green moss with a blob of butter on top…thank goodness for butter!


Today, I serve spinach but always fresh spinach.  It was a real game changer when stores started selling triple washed bags of spinach, because the bunched kind is often filled with dirt and needs to be thoroughly washed. Otherwise you end up with grit in your meals.

If you do buy fresh spinach, look for leaves that are crisp, green and free of decay.  Unlike lettuce, washing spinach ahead of time is  not recommended  because the moisture causes it to spoil. Store fresh bunched spinach in a plastic bag in your refrigerator and it will last up to 3 days.


Spinach has a reputation for being good for your health because it’s rich in iron.  But the iron is absorbed better when eaten with vitamin C.  Hence the reason spinach salads are often served with orange slices or strawberries.


When cooking spinach be aware that it reduces in size by about 90%, so cook lots.  It’s good in soups, stews, in dips, and in egg dishes such as frittatas and of course, in salads. 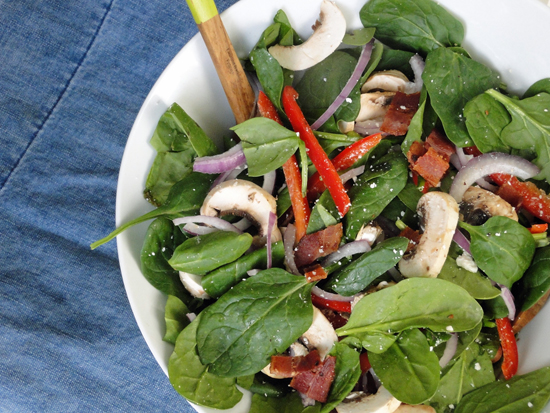 A colourful tasty salad that will soon become a family favourite.  Feta cheese is the secret to its success.


Dressing:  In a small bowl combine oil, vinegar, honey, and Dijon. Whisk.  Together and our enough dressing to coat and serve.